Today was a wonderful day… I can’t say the next sentence without a smile on my face… In our household, today was what has been referred to as ‘Daddy Daughter Day’. 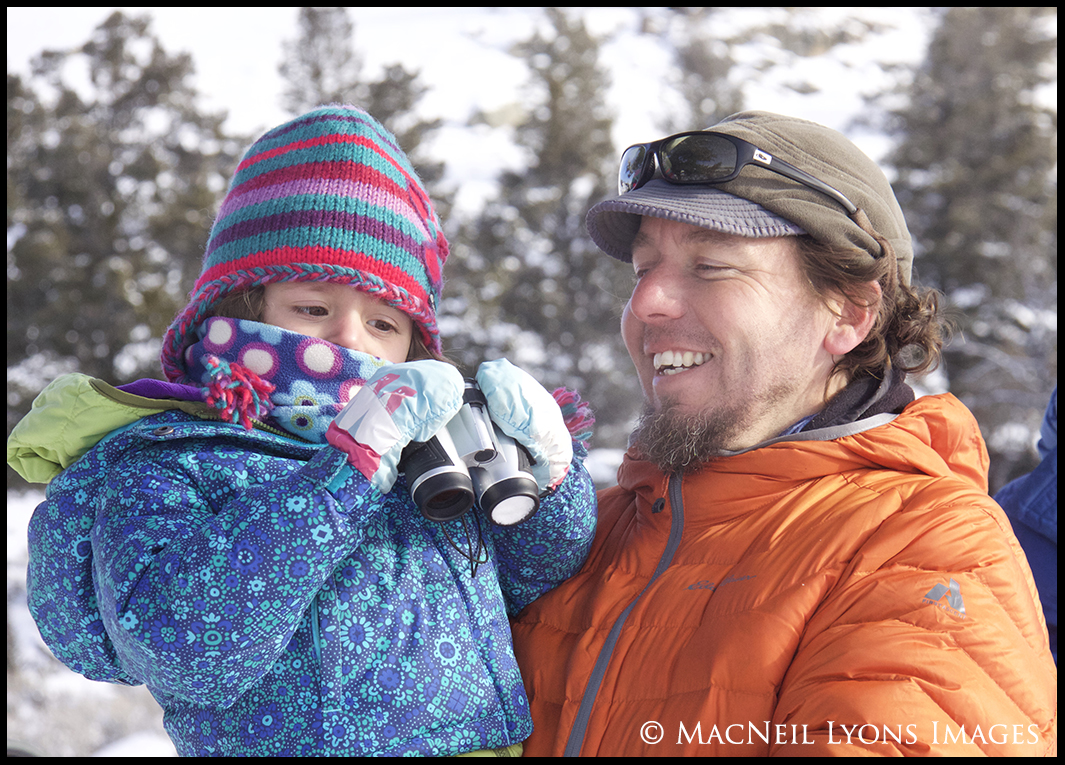 It was one of those days when I got up early, not as early as a tour day mind you. Packed a lunch, snacks and a thermos full of hot tea before the sun rose over the eastern mountain ridges.

The temperature gauge in the truck was reading 5 degrees F when we were leaving Gardiner.

Heading up the Gardiner River Canyon towards Mammoth Hot Springs steam rose from above the river into the sky, as the water temperature was obviously warmer than the air. A big bull elk grazed on a hillside above the road, a magnificent bull. He was completely tolerant to the cars driving past, just a few yards away. A half-mile further up the road, ice encased the adjacent grasses to the rivers edge as frosty bison stood still as could be. 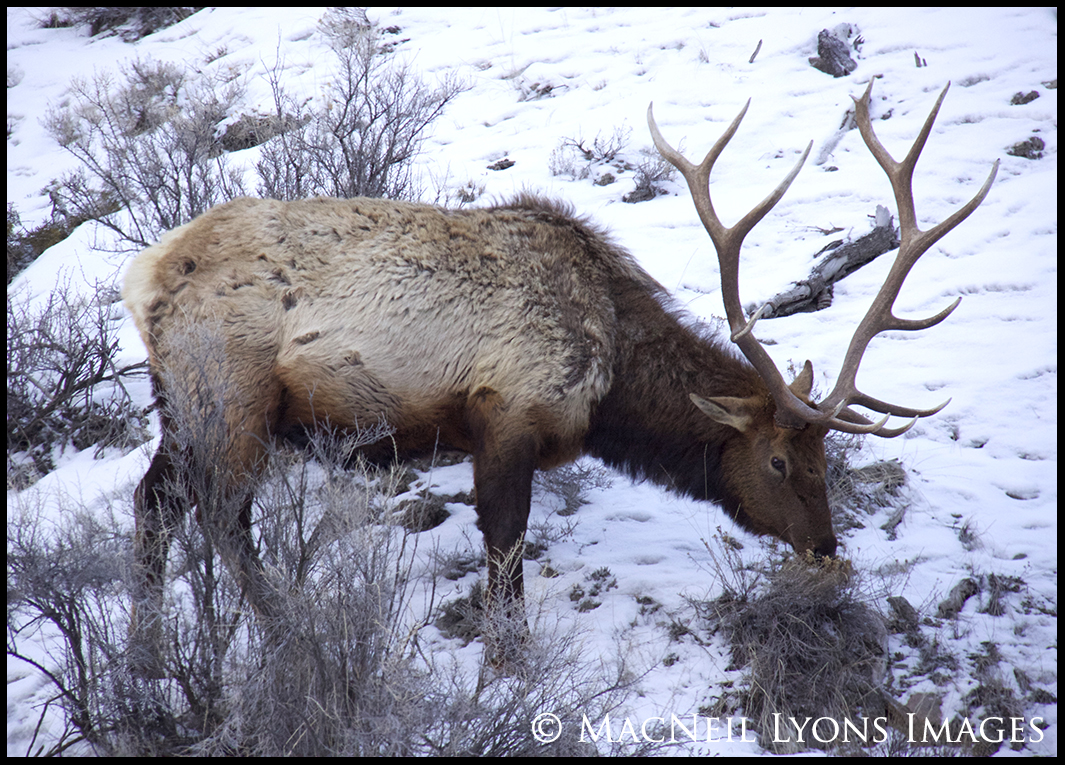 The morning light on the Upper Mammoth Terraces was ideal and it would have been great to spend a bit more time, but alas, we were focused on the four-legged creatures today! Daddy promised to share some of his Yellowstone knowledge, like, “how do you find a white mountain goat up on the side of a high snow-covered, white mountain?” For the answer to that question, you will either have to ask my daughter, or join me for a winter tour! 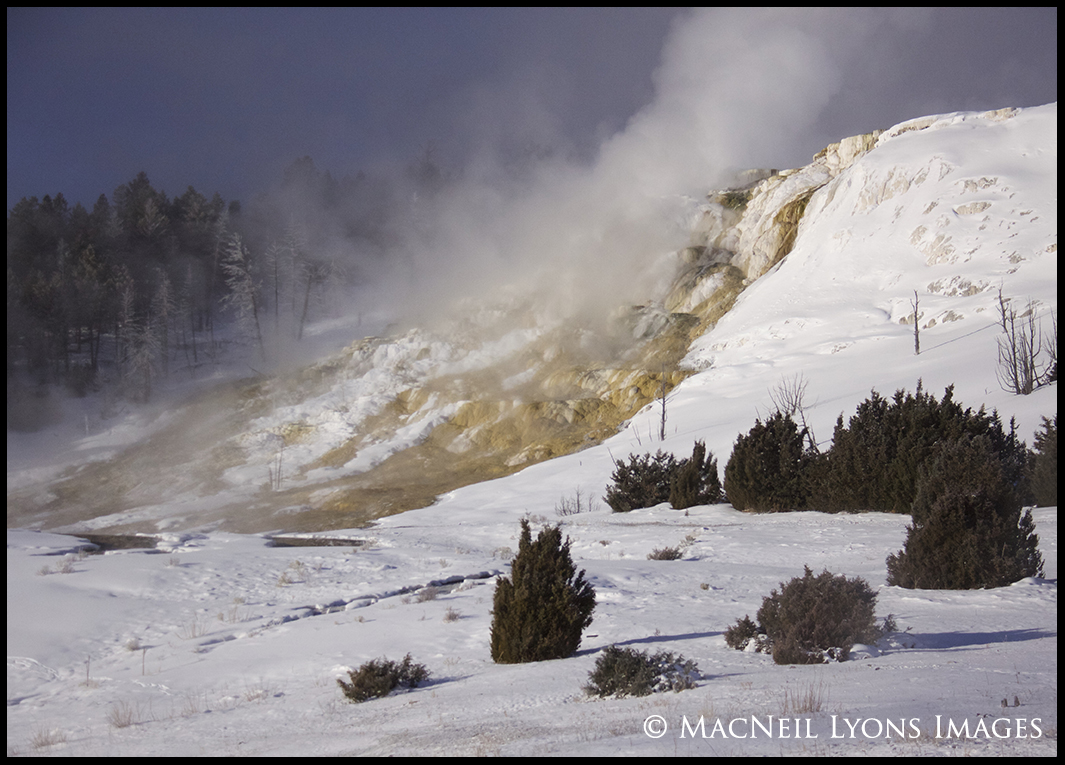 Across the High Bridge towards the Blacktail Plateau we drove… The further we went, the colder it got. The temperature gauge now was reading MINUS 10 degrees F. Dropping down toward Phantom Lake we met another group of bison, they looked as though they were frozen in time. 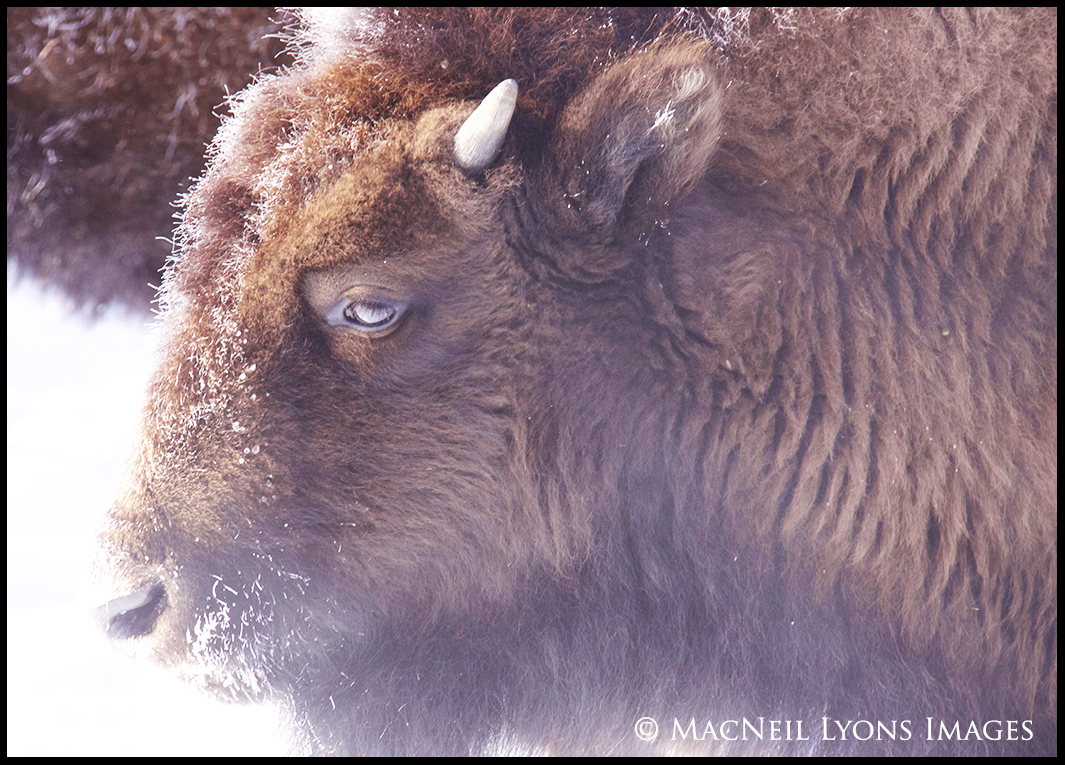 Towards Geode Creek and Hellroaring Overlook another magnificent bull elk met us roadside. He like some other bulls in his age bracket I think play the “human card” during winter. Meaning, they choose to stick near humans and tolerate the road edge to lessen the encounters with larger predators. Presumably, less energy can be wasted without having to always look over your shoulder for a wolf, bear or cougar.

On we go, past Tower Junction and the Roosevelt Lodge. I had received a text message from a friend that the Wapiti wolf pack was in town! An unusual location for this pack, but it is nearby the alpha male’s (755M) former territory. The temperature was now dropping to MINUS 11 degrees F, but some told me their gauge was reading MINUS 25 degrees F…. Either way, it was a bit chilly out this morning!

We parked at Lamar Canyon West, bundled for the cold and tromped out in near knee-deep snow to a better vantage point were the Wapiti pack could be seen to the south and the Junction Butte wolf pack towards the west. In all, about 16 wolves could be seen from this vantage… My goal was to get the scope on a wolf for my daughter and the one we focused on before getting too chilly was the ‘old man of the mountains’, 755M. (I have spent much time with him over the years, but that is for another story)

Not wanting to explain to my wife why I froze my daughter’s nose off while looking at wild wolves, we headed back to the warmth of the truck without setting eyes on the Junction pack. It was good to know that they were there, but we will have to save more extensive wolf watching for a warmer day. 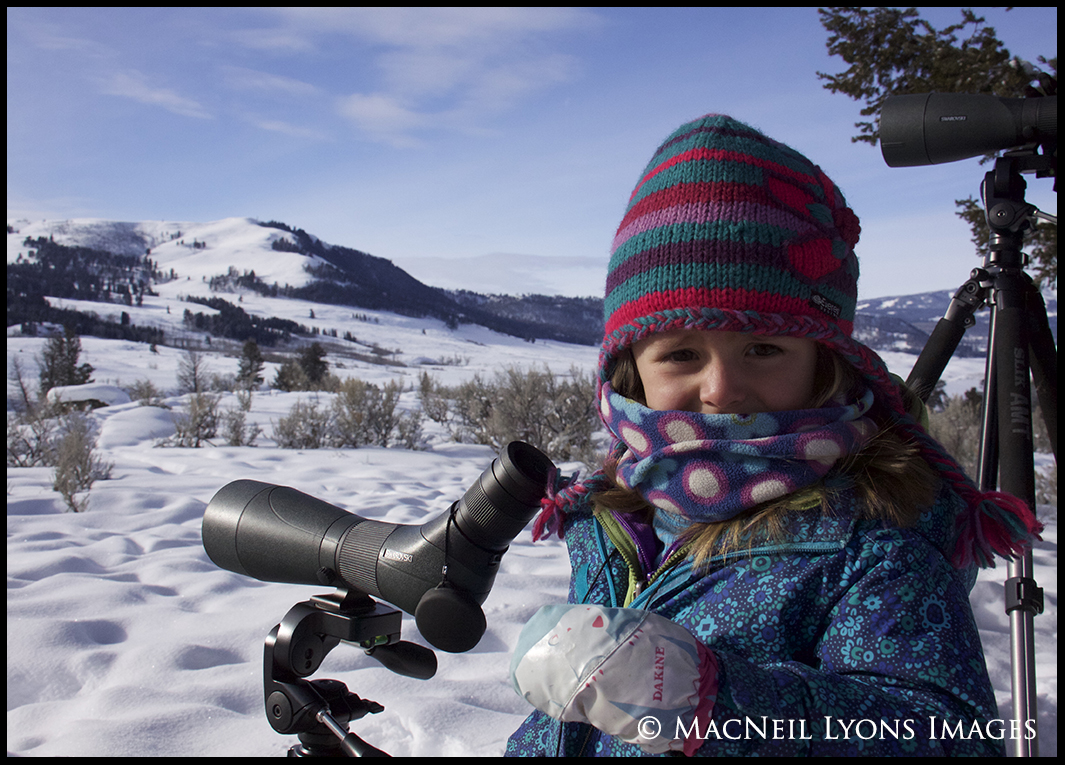 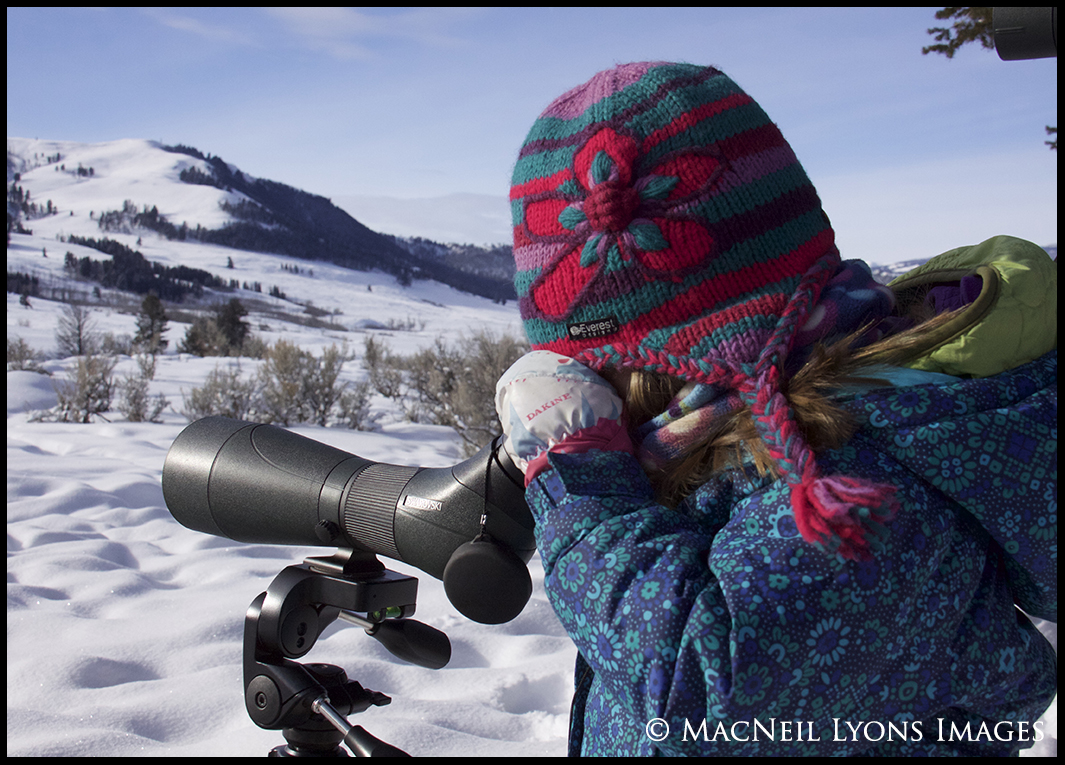 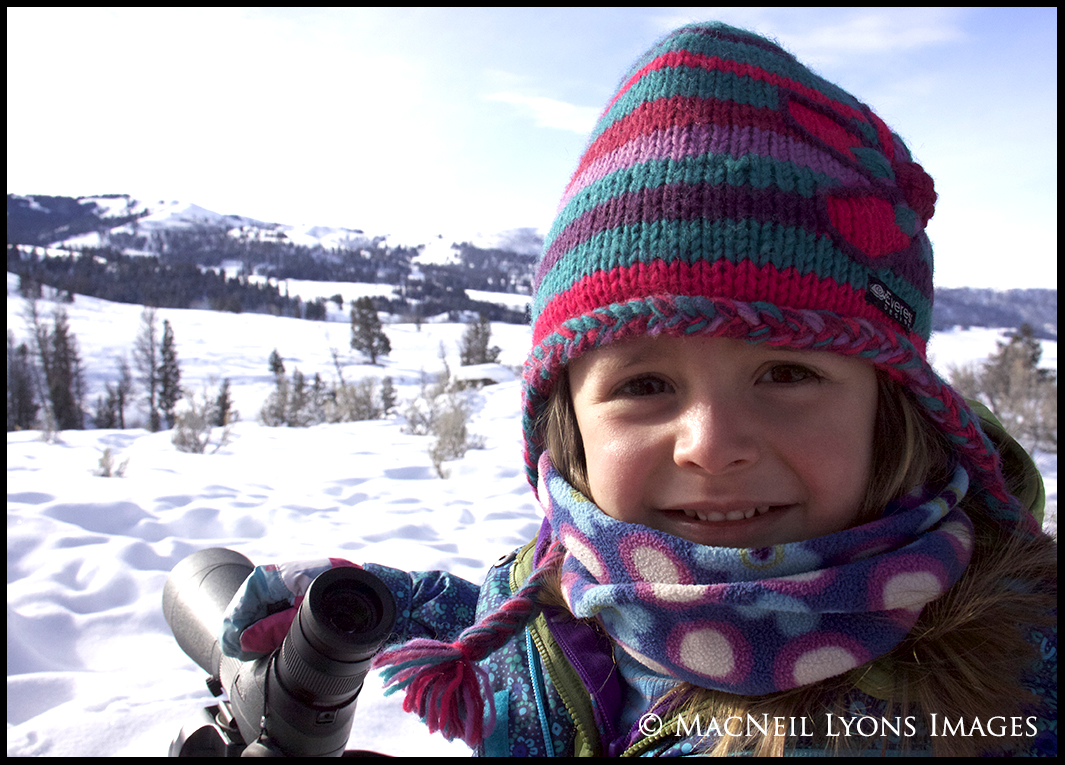 Into the historic and well-known Secluded Valley (Lamar Valley), the gauge was now reading MINUS 15 degrees F. We passed the Lamar Buffalo Ranch and inched over icy roads towards Soda Butte Valley in hopes of spotting a moose at our pre-determined turn around of Round Prairie. A few mighty Bighorn sheep caught our attention on the hills near the Lamar Canyon pack’s denning area.

Without a moose sighting, we bounced back westward to the beat of ‘Old McDonald Had A Farm’, with lyrics that included wild Yellowstone animals rather then your typical barnyard life… Wolves were seen on the Ledge Trail above the confluence of Soda Butte Creek and the Lamar River, but alas, we were too focused on our song to notice. I was set on showing her the Mollies wolf pack… They are 16 strong and a sight to see, especially stretched out over a snow-covered landscape.

We did see the Mollies, mostly sleeping on a distant hill with a few, maybe pups, feeding on a carcass they had taken a few days before…

Back along the way to Gardiner we had a coyote cross our path, a red fox sighting closer to Tower Junction, a golden eagle soar over top the road near Hellroaring and a bald eagle perched back towards the North Entrance Gate.

In all, it was a grand day spend with my three-and-a-half year old daughter in Yellowstone… Hopefully, I am helping set memories that will stick throughout her lifetime… Memories of joyous occasions experiencing and connecting with her front yard – Yellowstone National Park…

As this was my first blog posting for the website’s Field Note category, I thought it fitting to be about my Daddy Daughter Day. Come and see it for yourself. Let us at Yellowstone Insight help guide your next Yellowstone experience. I promise I won’t subject you to listen to me singing Old McDonald Had A Farm!

Until the next… Cheers.