A Rare Observation into the Wild – Cougar & Wolf 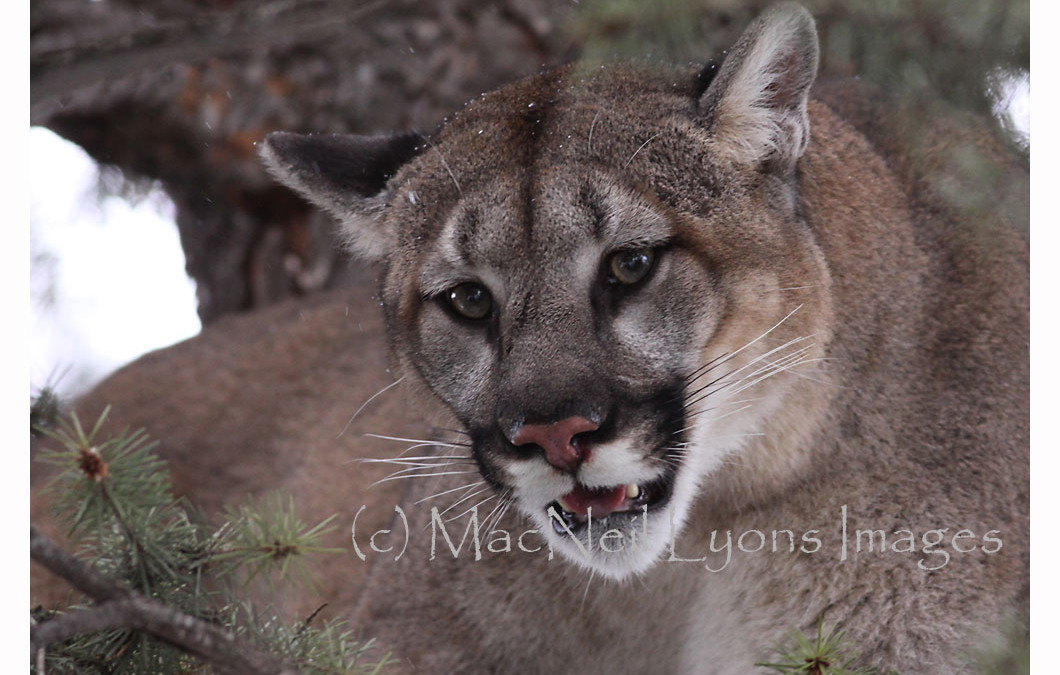 A Rare Observation into the Wild Wolf, Part I
By MacNeil Lyons

From the elevated view of Hellroaring Overlook, we watched. As quiet as a winter morning can be on Yellowstone’s Northern Range – this was one such day. A recently new snow blanketed the landscape as the next round of flurries snuck in to obscure our distant views to the territory below.

As a Naturalist/Guide, I try to remind my participants about how the noise level of our presence can either make or break a wonderful experience into the wild world of Yellowstone. We exited our vehicle quietly and attentive for what sounds might greet our ears. Not more than a few minutes passed, when the distant sound caught my ear. My hand quickly rose into the air, reminding others to stop shuffling the noisy ski pants and jacket sleeves. It began as one lone wolf howl, then two, then more… Each sound had a certain octave level, which did not at that time correspond with the other. As the wolves simultaneously spoke, the octave levels changed and started to melt into one, resonating through the natural white setting. Their sounds drifted up to our vantage point from somewhere far down below. The winter weather would not open its veil for us to pry into the wild wolf world at that moment, yet it didn’t seem to matter. It was the chorus of wildness that satisfied our souls. We waited patiently as their tones slowly dissipated.

As the snow began to lift, I placed binoculars to my eyes, aiming towards the direction of the recent howls. Instantaneously, movement caught my attention. It was a wolf moving among the scattered sage and rabbit brush. Then there were two and finally a total of three, one collared black and two gray wolves (one with a collar). It was the alpha female of the Hellroaring Creek wolf pack and two adult males. They quickly covered ground near the Yellowstone River, across the flats of sage moving up Hellroaring Slope following the Little Buffalo Creek. The snow flurries came back again as we lost sight of the scene. One observer thought she had seen the three greet another couple wolves just as the snow thickened. Each of our imaginations continued to play out what was happening in the distant white world of wolves as we moved on our adventure in to more of Yellowstone on that wonderful winter day.

A Rare Observation into the Wild Cougar, Part II

It was the vast openness that first captured the attention of the group. From our observation deck, the Hellroaring Overlook, we scanned the diverse landscape in search of movement. From the dense Douglas fir forest to the open sagebrush; the river and creek corridors to the dark volcanic rock outcroppings; the view to the distant landscape below us was amazing. Just the morning before, from this same spot, I had the opportunity to see a few of the Hellroaring Creek wolves. We now looked for another elusive large carnivore that calls this place its home. The dialogue among the Northern Range wildlife-watching world was that the day before, just a few hours after our chance observation of the wolves, cougars had been seen.
We scanned the area with binoculars and spotting scopes. Down below us, on the edge of a rocky cliff above the Yellowstone River, stood a mountain lion. Majestic in appearance and controlling our view, there stood a profiled image of a magnificently wild cat. This was my first look at an animal that had only been but a dream for me. Throughout the many years of walking in this animal’s territory, until this day, it has only been tracks, scat, scratches and cached kills that I have been witness to. Even once, I felt that this elusive creature quietly observed me when I stumbled upon a recent elk carcass that had been obviously cached by a cougar.

From the moment I looked through that scope and saw with my own two eyes, my first cougar in the wild, it was unmistakable as to what it was. The profile view of a round head with a very attentive expression; the slender body with a slight dip in the spine; long legs that I could easily imagine extended to wide paws holding sharp retractable claws; and of course the feature physical characteristic that gives this animal away – the long tail.

I would expect a look at a wild mountain lion would be but short and sweet, yet this morning was promising an un-usual observation into this wild scene. As the one large cat moved out of our view next to the base of a large Douglas fir tree, we glanced to the right to find another large cougar. Not just one, but an adult female and her three kittens.

This being my first look into this chapter of wildness was proving to be for me, a once-in-a-lifetime rare glimpse to splendor! Just about a mile or so away, a total of five mountain lions greeted us this morning! As we watched from our perch, one kitten still a bit spotty with its young fir coat, sat away from the rest, maybe the independent male of the litter. This kitten sat alone watching its family from the edge of a snow-covered cliff. I could only imagine that the sound dominating its ears was the rush of the cold mountain water in the Yellowstone River flowing below. To its left sat the other two offspring, both nearby one another, but not together. Their mother had just recently appeared from behind a large glacial boulder. She now stood still, observing her surroundings with cautious ease. The guess among our fellow wildlife watchers, who had been out a few hours before us this morning, was that there was a kill hidden beyond the rock. She had been there since the afternoon before and would be until either the food was gone or something like passing wolves would spook her away from her dining arena.

We suspect that the first cat I described was the survivor of this female’s previous litter. Commonly, only one of three kittens will survive to become an adult cougar. In this area of the Northern Rockies, wild mountain lions can mate any month of the year; it could be that she is still tolerating this cat around, even now while raising her next set of young.

We watched for 45-minutes as the cats lounged in the morning light. Every once in a while the kittens would stand, stretch and move to join another of their clan. The older cat, stretched from its perch in a branch of the old Douglas fir, pounced to the ground and moved on, not to be seen from our vantage point again. The independent kitten moved, but stayed on its own sitting in the snow, watching. My last view through the scope caught the wonderful interaction of mom and young. As she lay on her left side, propped on a slight incline at the base of a Rocky Mountain juniper, one kitten walked next to her stretching its front paws and clawed at the tree root. It than circled around mom’s backside, batted her rump with its right front paw and slumped down on top of her to sleep off some lazy afternoon hours.

This was my recollection on a true moment of wildness that occurs around every part of Yellowstone on any given day… I just feel blessed that we were able to witness such a moment.