After many seasons of watching fox in Yellowstone’s ecosystem, I have never been present at the time an adult fox returns to a prey cache (collection of items in a hidden or discrete location).
Early this morning, a good friend, Robbie stopped with me at a well-known parking area overlooking Lamar Valley to see what we might be able to ‘glass’ with our binoculars. While we were looking for more distant sightings, a magnificent red fox was paralleling the roadside, just behind us. Robbie called my attention to it and as we watched, the feline-like canine walked across the crusted snow and right to the spot it was interested in.

Instead of cocking its head side-to-side and tensing the leg muscles in anticipation of pouncing, this little fox shoved its nose in the snow and began to dig. As we got the cameras set up, it continued to dig into the snowpack. Finally reaching the focal point, the fox pulled up some frozen piece of food! Was it a small prey species typically found in Yellowstone or was it a small chuck of frozen meat that was pilfered from a carcass site? It was hard to discern exactly what it was, but I was thinking a mountain meadow vole. Within a few bites, it was gone. The fox proceeded to stick its nose back into the recently dug excavation site and pulled out another, then another and another… I believe four small morsels of goodness were consumed at this one-stop-shop…

In a 1992 study done on food hoarding behavior by red fox, two biologists from Calgary noted that red fox who reside in a large seabird community of Newfoundland where food was abundant in summer but not so much in winter, the red fox made, what was referred to, as large larder hoards. This is thought to be associated with a superabundance of prey during specific times of the year and appears to represent a flexible response to environmental conditions.

Larder hoards are typically located in an area of the animal’s greatest activity, like a den site, which are more likely to be defended. In the case of this Yellowstone fox, I pondered if the cache was adjacent the roadside, in hope that it would be less likely found by another fox or coyote or wolf, as the human presence was close.

This is not the denning season, so for the fox to cache food now could mean that this fox had a great day hunting a few days ago and thought caching might be beneficial for a future meal when hunting was limited.
As we photographed and watched for a few minutes, the fox ate approximately 3-4 of the small (fox mouth-sized) items then pulled at least two more out and walked off with them.

Red fox checks the scene before leaving with the remaining prey from his secret food cache. February 11, 2016. 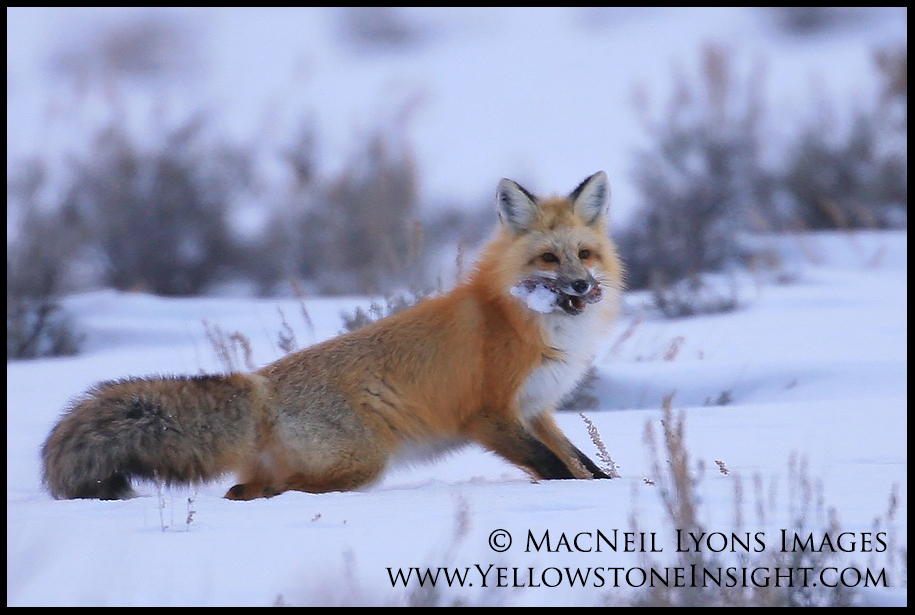 I assume this could be a young male, leaving a scent mark by doing a “lean forward”, before taking off with his remaining supply of food. February 11, 2016.

For me, this was extremely interesting to watch. It was quiet with only one other car that saw the fox behavior this morning. This might prove to be a good spot for this fox to return to… Time will tell, but none-the-less – it made for a great first stop for the morning outing. Thank you Robbie for noticing the fox behind us, and thank you Yellowstone for allowing us to witness some of your wonders this morning. 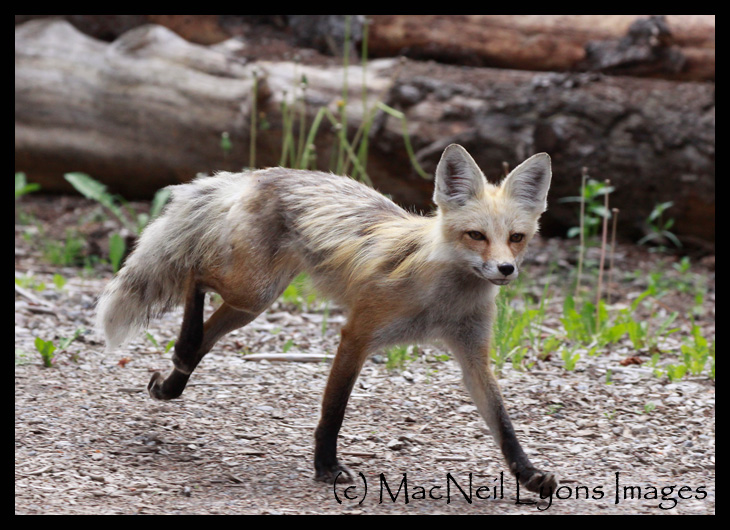 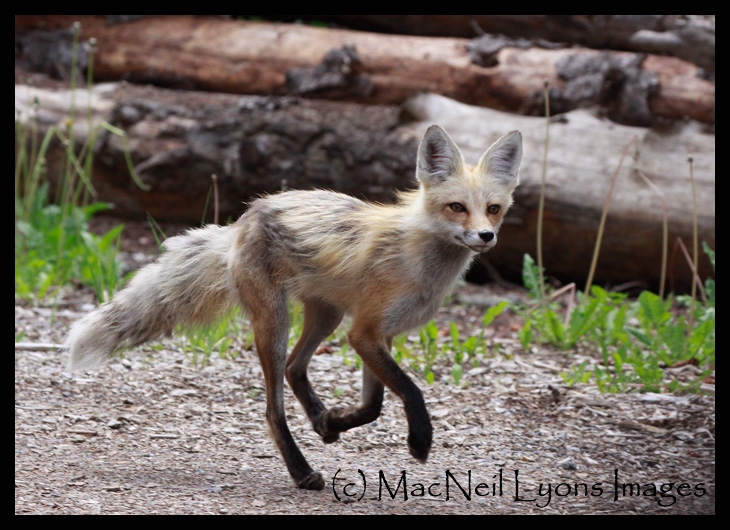 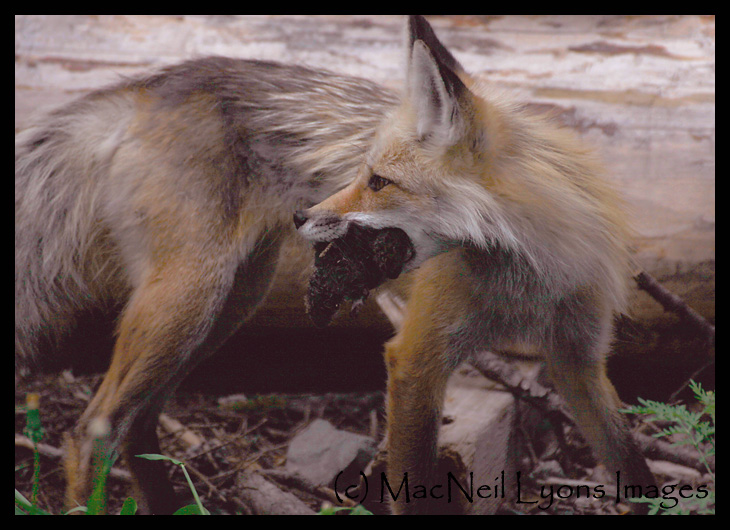 A vixen retrieved her mouse/vole stash and returned to the den. July 12, 2012.