Headed into the park around 6:30AM this morning, we quickly found bison, elk, pronghorn and varying waterfowl to start our count of wildlife on the greening landscape. As we continued out towards Tower Junction we passed more bison and elk grazing happily on the fields of green.

At Slough Creek, one of the Insights from our tour was to take notice of the prey behavior, as they looked more attentive to their surroundings. This could be a sign of a passing predator (heads up, rather than down and grazing). A group of elk we were watching was focused, but it was a passing vehicle that had their attention. 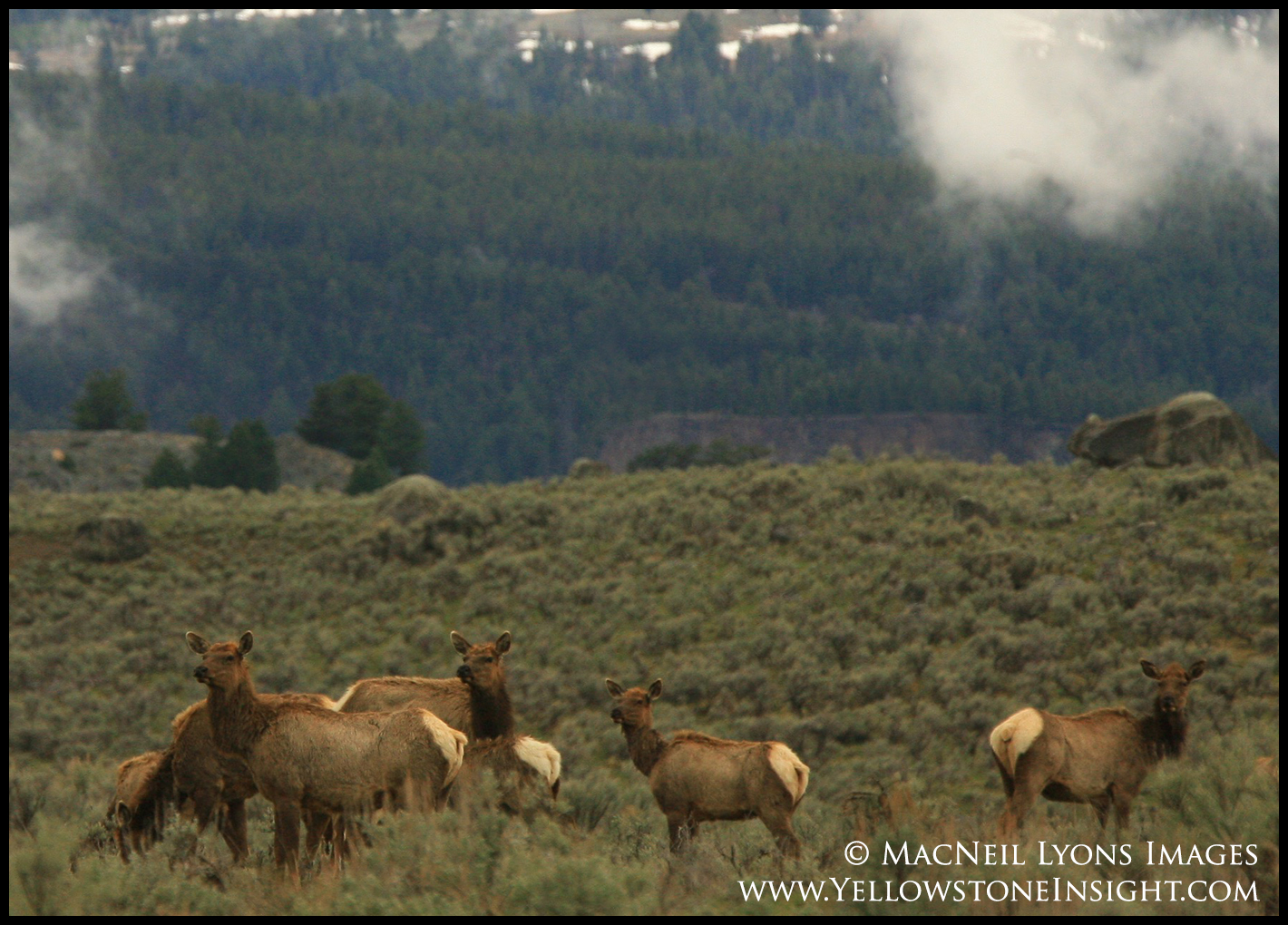 On to the Lamar Valley… the cars that were jammed up near the entrance to the Lamar Buffalo Ranch caught my eye from the distance. We stopped at the elevated perspective of a pullout known as Dorothy’s Pullout. Not long after assessing the valley floor, it was to the south of the valley that the bison were bunched up and a pack of wolves surrounding and were aggressively perusing what I thought to be either a yearling or a newborn calf. Turned out they were persistently trying to gain access to a new calf, but the adults held steadfast and blocked the wolves with a line of muscle and horn that could not be penetrated.

As the group of 12 gave up their attempts, they slowly swaggered westward with the annoyed bison following along, seemingly keeping tabs on the 4-legged predator and making sure they were truly on their way.

Down to the Confluence of the Lamar River and Soda Butte Creek we drove. Sadly a young bison calf, only a few days old lay recently deceased on the gravel bank of the Lamar River with a delighted raven already feeding. It is certainly a tough life in the wilds that make up the Yellowstone ecosystem… Bison can certainly persevere many hardships, but the first days of a bison’s life are most difficult. Creek crossings, cold temperatures, spring snowstorms, and predators all around… But we need to remember that where there is death, there is life. As sad as this is, the bison calf will feed a few creatures if discovered before the water level rises. I can only assume that the little one couldn’t make the river crossing and drowned. Time and time again, I see new bison swimming on the downriver side of their mother, letting mom take the brunt of the water’s force… But alas, this tactic might not have worked this time. Along the banks of Soda Butte Creek a separate group of bison cows and newborns stood near the waters edge drinking and nursing. We waited a few minutes to see what was to be their fate. As we watched from afar, the dark color of a fast moving bird caught my eye! The aerodynamic wings were the giveaway of the falcon. As I caught up to it with my binoculars I saw that this peregrine falcon was hunting ducks. In mid air it slammed into a mallard hen and she went careening down, out of the sky and into the cold waters below. UNBELIEVABLE… That was a first for me!

I noticed the falcon flew past the water and perched on a nearby dead lodgepole pine with feathers caught in its talons. I returned my gaze to the duck as she paddled to shallow waters and a pair of Canada geese. She proceeded to flap out both of her wings, readjusting the feathers that were probably out of line from the contact with sheer brunt force and sharp talons. From the distant view, she seemed to have survived. She hung close to a pair of Canada geese, maybe for protection. Her mate returned to her side a few minutes later. The falcon stayed idle the whole time we were there. I am not sure if it made another attempt or if the hen fell to injuries sustained… Back near the Lamar River and Soda Butte Creek confluence, I spotted the spectacular coloration of a Harlequin drake. Magnificent in appearance, I was thankful that not a car was in sight on that straight stretch of road, so I could quickly snap a frame with the camera without getting out of the vehicle, which would have disturbed the duck for sure… On the return towards Gardiner to end the day we rounded the corner to see the beginnings of my first “Bear Jam” of the season. A decent sized boar black bear was chowing down on lush green grass near the entrance to the Blacktail Plateau Road. With a few cars around and most people being aware of the dangers this bear could be, stayed in their vehicle or to the other side of the road. He moseyed over to some signs, one of which happened to be a laminated map distinguishing the Blacktail Plateau Bear Management Area. He was just outside the boundary, which is a closed area to humans and a centrally located zone where bears can roam freely from human activity as they emerge from their dens. Yet here he was, roadside, outside the protective zone for his kind. He stood on his hind legs and proceeded to scratch an itch using the signpost as a scratching post. Instead of backing away from the road as it seemed he was planning to do, he turned right back to the grassy roadside to graze happily. As more cars started to arrive, and with his movements toward the road edge, we gently drove in front of him as he walked on to the macadam and crossed in front of the group of onlookers. Distinguishing scar across his nose and recent injury above his right eye. I’m not sure if I am ready for the summer crowds!

But nonetheless, any day in Yellowstone is a grand day…

Give us a call – talk with us as to how we can make your Yellowstone experience go beyond your expectations!