With a waking temperature of negative 27 degrees F in Gardiner, we chose to start the day slowly… Our dog Sadie needed her time outside in the morning so Daddy took the reins and donned a lot of layers. I tried fitting the rubber-soled booties on her, but alas, it took less than 5 minutes for Sadie to shake them off. It was a wonderfully quiet morning with the adjacent Electric Peak looking like it was on fire with the rising sunlight… Each step on the snow sounded like we were walking on Styrofoam.

After a few hours had passed and the sun had crested to the western side of the house, I attempted to start the truck. With a few moments of apprehension, the engine finally fired and the warming process began. My wife stuffed our daughter in layers for warmth (not as much as poor Ralphie in the movie, The Christmas Story) and we were on our way to our Daddy Daughter Day in Yellowstone National Park.

It had been way too long since our last Dad and Daughter outing. I was excited, as was she. With her questions boiling over, we entered the northern park gate with smiles. After obtaining the official Yellowstone Mammals list from the National Park Service gate ranger we now had a task – to see the animals that my daughter circled as we drove up the steep, snow-covered roads of the Gardiner Canyon towards Mammoth Hot Springs.

As we ascended in elevation I thought out loud, what if we could make this “a real special kind of day”?  What if we can make this a, “three dog day”?  With this new consideration being quietly pondered we excitedly decided to make it a reality… I sometimes like having a little out loud premonition as to what might become of a day in Yellowstone. It offers up positive thinking and optimism as to what could be!

My daughter’s hopes were what I considered, ‘fairly simple’ for a guide (right?) – she checked on her Yellowstone Mammals list – Bighorn, Wolf, Bison, Elk, Moose, Pronghorn. She verbally expressed to me that she knew we wouldn’t see any bears as “they are hibernating”. I was happy to know that she was on top of what we would be seeing on this day tour of Yellowstone…

As we left Mammoth Hot Springs we quickly saw the herds of elk and bison… Okay, 2 out of 6 checked off! An easy day ahead, right? 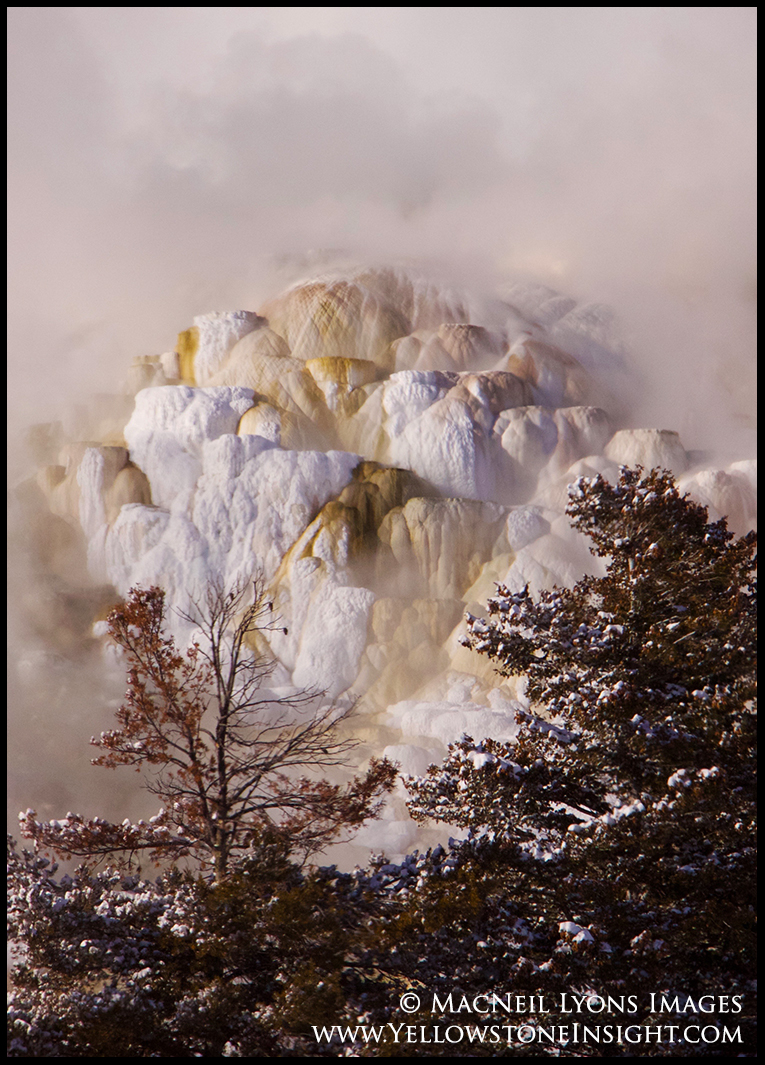 The drive towards Roosevelt Lodge was rather “quiet” as far as wildlife is concerned, but honestly, the beauty of the winter landscape on this bluebird day was phenomenal. Untracked snow stretched on for miles and above, a crystal blue sky could be seen as far as the horizon. We turned the corner at the Roosevelt Junction and as we crossed the nearly frozen Yellowstone River a coyote made its way through the sagebrush and up a hill, deep with snow. 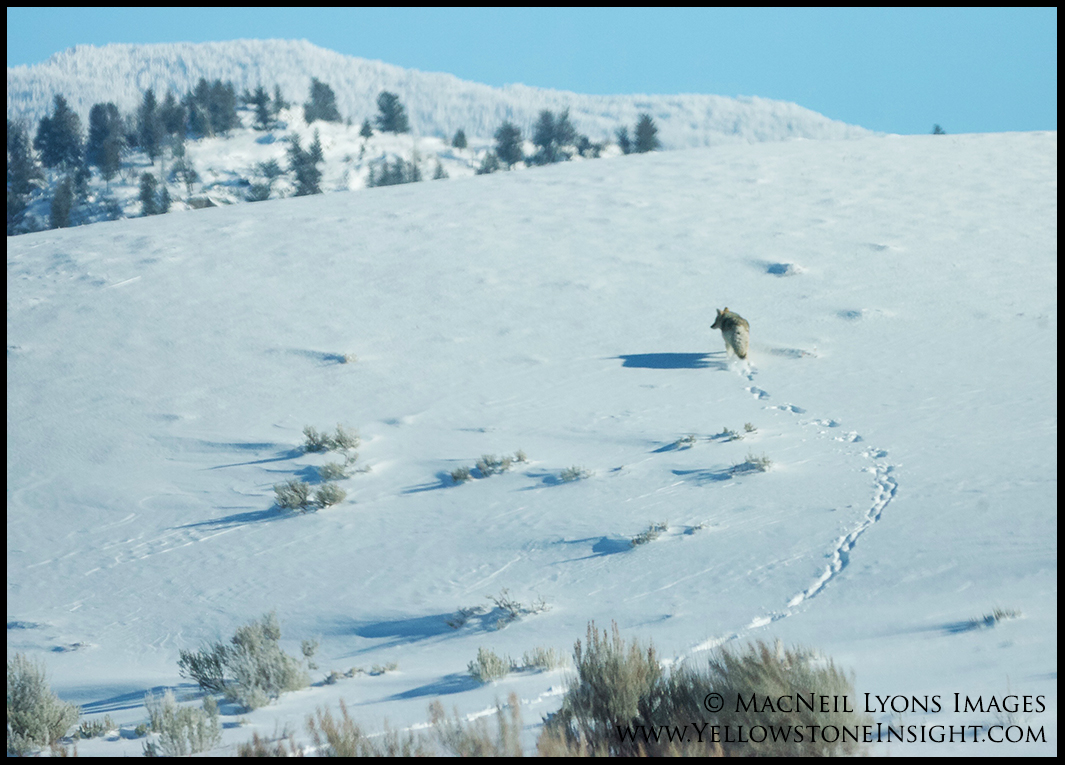 Into the Lamar Valley we drove. I knew that there was a good chance we would see magnificent Bighorn rams on the eastern side of the straightaway. Sure enough, there they were… I think 5 large rams, heads down, focused as they moved their front hooves to uncover the dry vegetation for consumption.   Now we are 3 out of 6 on the checklist!!! 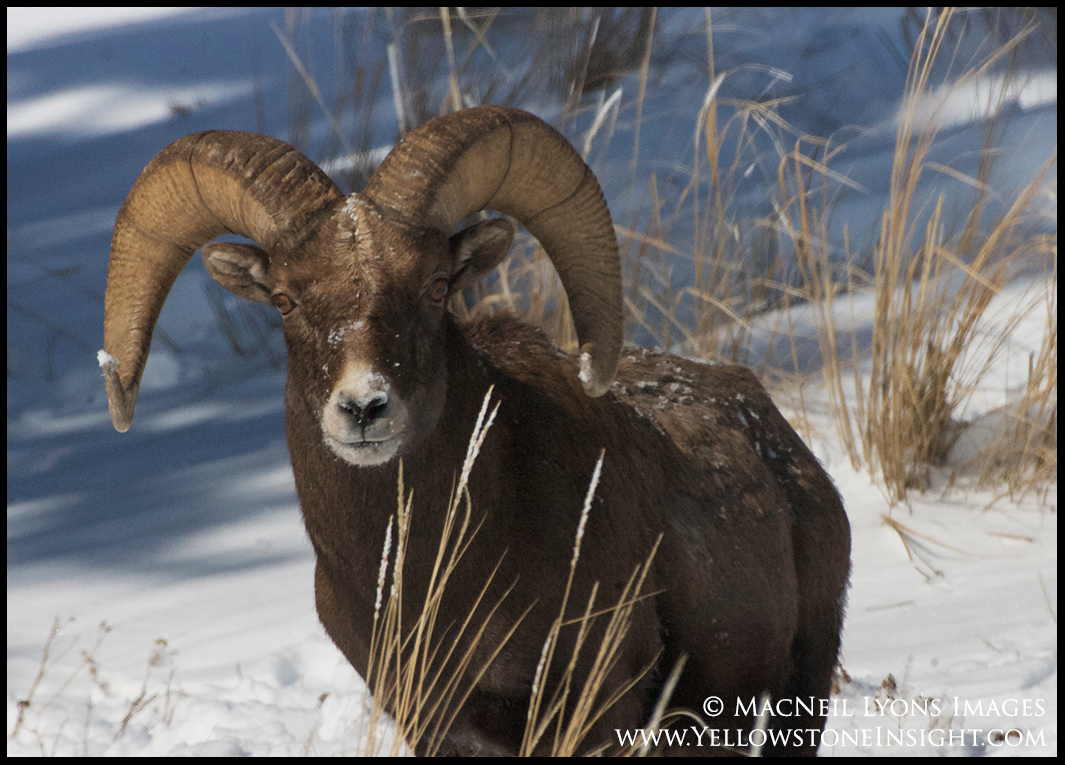 I had heard from a friend that wolves were being seen to the east, around the bend in the road towards Soda Butte Creek. We pulled in just in time before the Lamar Canyon pack began waking from their afternoon slumber. I angled the Swarovski spotting scope on the black-colored wolves sleeping on the pure white snow. As the temperature was hovering at negative 26 degrees F, I grasped Kaia out of the truck and moved her towards the eyepiece. She watched through the spotting scope as the alpha pair stood and stretched, moving toward the darker timberline of Douglas firs. With magpies flittering about, it seemed obvious to me that there was a nearby carcass. The group of visible wolves quickly made their way out of sight for another feeding. 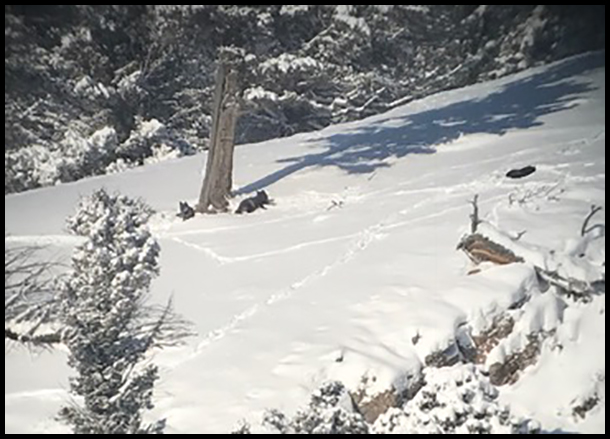 With each breath, we expelled steam from our mouths like dragons into the cold air. We tucked back in the truck and headed home… We would wait for another day to spot the mighty moose from my daughter’s checklist. 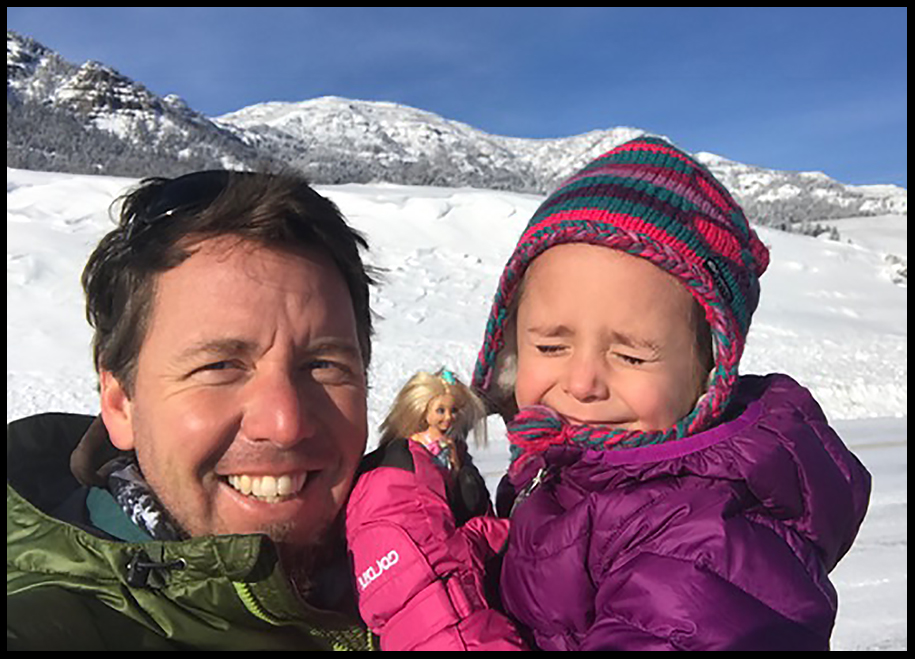 Looking directly into the sun for a picture is difficult… 😉

As Kaia slowly drooped her head in the warmth of the truck on the westward drive with the late afternoon sun shining brightly in her window we passed through Little America and the glacial boulders.

It was near the Blacktail Plateau Drive entrance that I spotted our third wild dog in the middle of the road. I pondered if I should wake the sleeping one to see the animal that would make our Triple Dog Day a success… She was out and looking so peaceful that I chose not to bother her. Instead, I captured the moment with a camera so she could see at a later time. It was a beautiful red fox. I had it all to myself at that moment… With a short snout, it appeared to be a young fox. By its behavior, maybe habituated to the roadside as well (sadly). I moved on without giving it much time to consider that food might be thrown from the passing vehicle window. 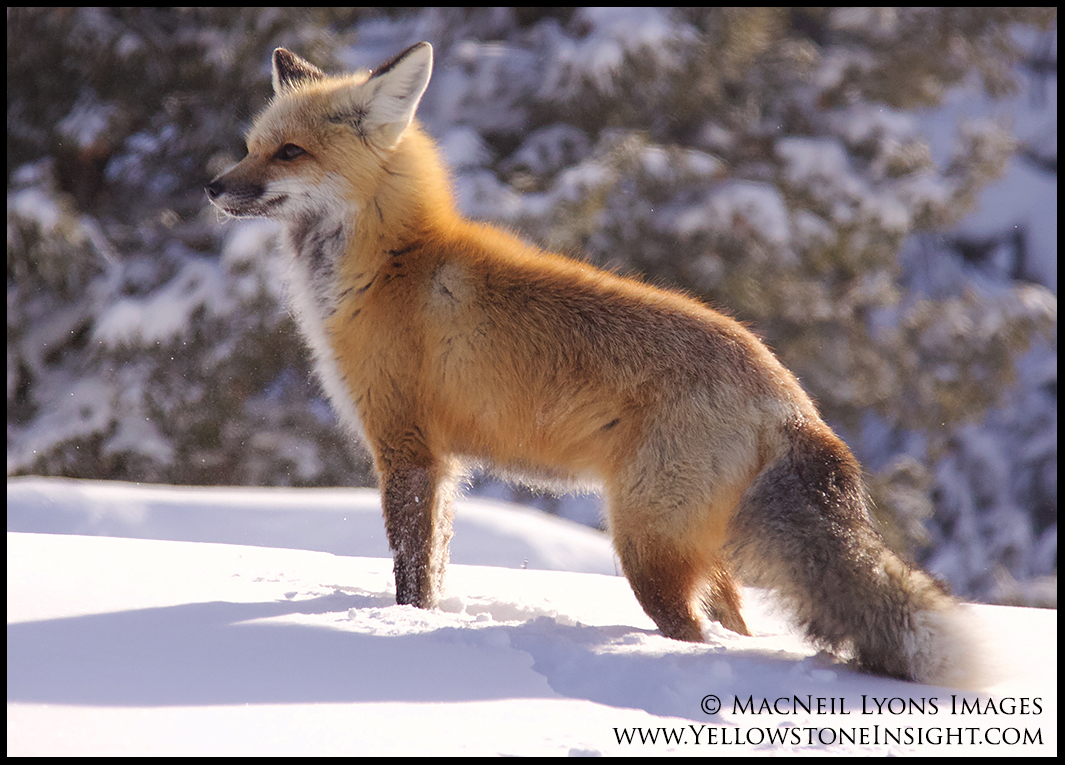 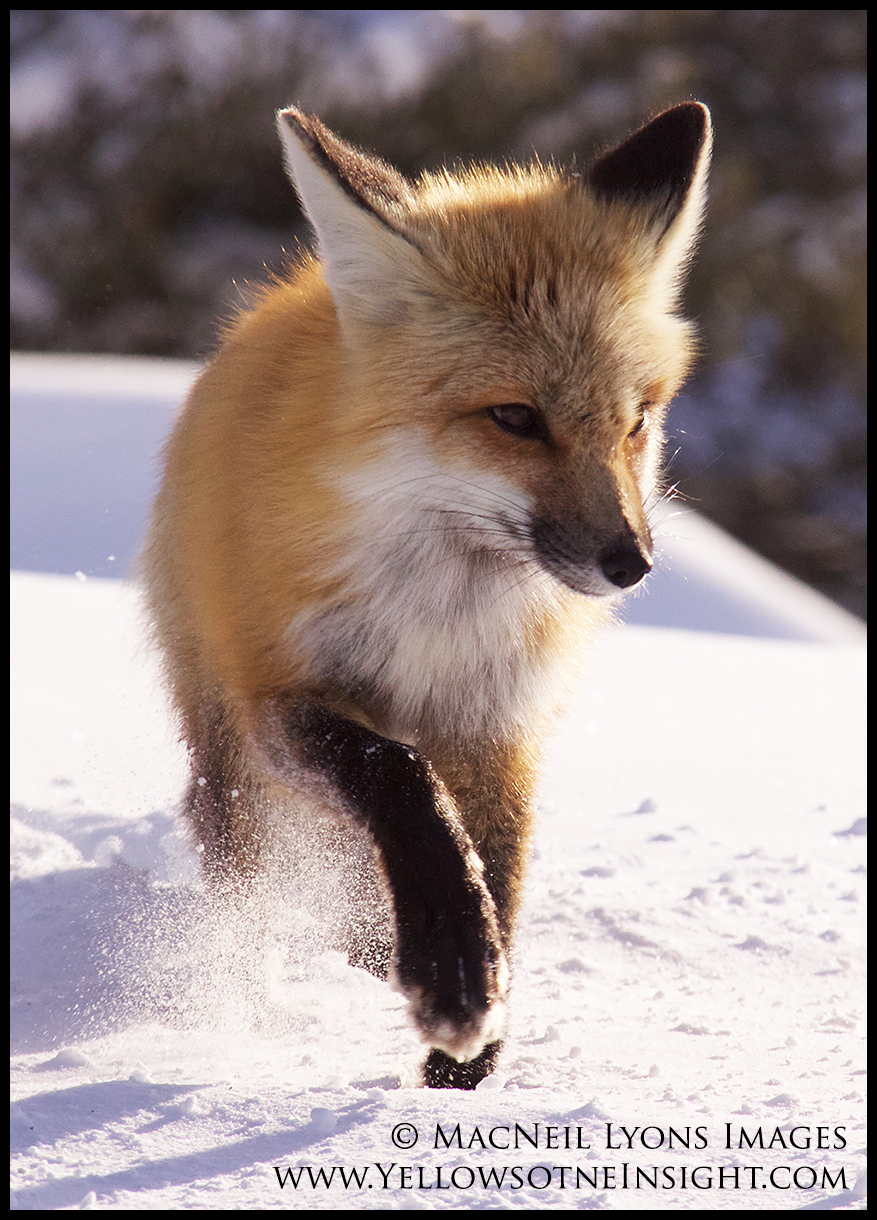 As Kaia woke, we were near Lava Creek Picnic Area… Not far from Mammoth Hot Springs. I pulled over to show her the image of the fox taken with the camera. She gleamed with excitement and not at all concerned that she had missed it. As I reminded her that we had now succeeded in our Three Dog Day, she politely informed me that we had actually had a Five Dog Day! The coyote, wolf, fox were the three wild dogs. But we had, patiently sitting in the back next to her, our family dog Sadie and her plush toy dog, Sally. So we had indeed had a Five Dog Day… 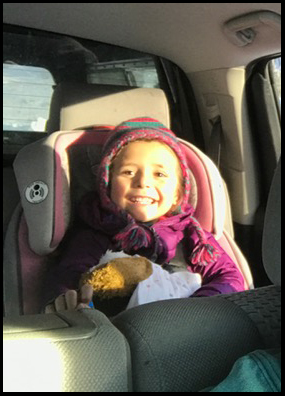 As we rounded the bend near the historic Roosevelt Arch back in Gardiner we did see a few Proghorn grazing (now 5 out of 6 on the Yellowstone Mammal checklist).

So, until the next Daddy Daughter Day when we will be in search of the wild magnificent moose, I trust that you will enjoy this festive time of the year.